One of the great things about getting older, at least in regards to interior design, comes the sudden realization that you don’t have to do a lot of things

I don’t have to adhere to what the rules say.

Aging is freedom (never thought I’d utter that sentence). But it is.  You gain a certain clarity knowing that other opinions don’t really matter.

You shouldn’t have to care. Especially when it comes to your home.

Case in point: My powder room.  A teeny tiny room with zero personality and void of natural light.  And BTW – Trying to take decent photographs is an absolute nightmare. So I will forewarn you now: the photos are pretty awful.

After the decision was made that I could no longer cohabitate with Scary Clown Face anymore, I was lucky enough to find a stash of antique solid interior doors (complete with original hardware) on Craigslist.  All the interior doors were changed out,  and things quickly started to snowball.  Finally, it came time for the the sad little room to be renovated.   Everything was builders grade.  And it was so plain and boring, that I never took a photo of it.  And now I wish I had.

This is a copper sign that I have on the outside of the door.  Yes, it could stand for ‘Walter Cronkite’ given the amount of time my husband spends in there reading the news – but, in actuality, it stands for Water Closet.

It’s the English in me, sometimes I just can’t help myself.

So imagine, if you will, oak builders grade vanity, linoleum flooring, and a toilet.  Oh, and the walls were the customary ‘orange peel’ texture.  Because if there’s one thing that will throw me over the edge, a orange peel textured wall is a sure thing.

At about the same time we installed the interior doors, we had the carpet pulled and hardwood floors installed throughout the downstairs, which I love.  So the powder room now has  wood flooring.  The first thing I really had to tackle was the walls.  Given that it is a tiny space, it literally took  no time  to put on a skim coat over the orange peel.  I really didn’t want a super smooth finish because I wanted the walls to have an aged plaster look to it.  Some subtle texture perhaps, but nothing crazy.  And I was going to use Pure & Original Marrakech to get that look.  I’ve used this product before, and let me tell you it’s a gorgeous material.  Surprisingly, very easy to use with a trowel.  So, one coat of skim coat, one coat of white wallprim and a top coat of Marrakech and then sealed.

These are the colors that I planned on working with.

I already know what you’re thinking: Not very interesting. right?   It took me hours to decide on Apple Blossom Marrakech. And it’s basically white. Hours of my life I can never get back pondering over which white chip would work best. The insanity of it.  It’s a mad mad world, I tell you.  But it’s a lovely white.  And the Pure & Original Classico in Country Beige I decided to use because 1: It’s a great neutral earthy color  2: My lower kitchen cabinets are painted in it, and 3: I had spare paint.  Likewise with the Soft Asparagus Classico, I had some spare and thought I’ll just use that on the wood trim.  There’s only so many hours I’m willing to waste looking at white paint chips.

(Plus, there’s no natural light in the room, so different hues etc wouldn’t make a huge difference).

So, back to the walls.  The troweling was a lot of fun, so much fun that I almost feel as though I know what I’m doing.  When my contractor came to install the vanity,  I heard him say to a friend “Look at the walls, Diane did those”.  Now – I would like to believe, deep down, that he was saying

And it’s OK because I don’t have to care.

But to defend my work, I did purposely try and get some of the corner plaster to look layered and chippy.

That was intentional.  On a side note, I went to the new remodeled Anthropologie in Portland this weekend, and the dressing rooms have the EXACT same wall treatment.   THE EXACT!

My vision for the powder room went something along these lines: industrial meets art gallery meets Old Worlde.  I know – all over the place.  It sounds completely and utterly mad.  And that’s OK.

So – the walls were going to be ‘Old Worlde’.  Rustic, aged plaster done in a soft white Marrakech.  White walls? Yes, how bold, how very…very daring!  The whiteness/starkness was also going to lend itself to my ‘gallery’ need.  I have a painting that I’ve wanted to hang for ages.  And it really needed a white background to make it POP!  I had already decided that to ‘ground’ the white I was going to paint the ceiling with Pure & Original Classico in Country Beige (along with the interior of the door).  I often think that many people forget that the ceiling is a blank canvas and it’s OK to use color there.

Ceilings don’t have to be flat white.  Seriously!

I love mixing up styles.  Take a look at my vanity.

I wanted to keep a lot of the wood showing,  because it’s old English pine – but I wanted the vanity to have a custom feel to it.  I did the image transfers of Eros and Cupid from a set of postcards from The Louvre Museum). And again to juxtapose the old vs new I mixed it up with a contemporary  IKEA sink and faucet.

Notice the green ceiling peeping through? I love it.

* Also, please refrain from using the hand towels to dry your hands.  It took me a long time to get them equal.

Don’t rough them up.  Use your pant legs or sleeves, that’s why you have them.  Our friendship doesn’t need this kind of pressure.

And talking of obsessive traits, I was equally obsessed with this Schoolhouse Electric light fixture, for a long time (actually for an insane amount of time).  Because the walls are white (yeah!) I knew I could play around with color.

The light fixture would be a great way of introducing color into the pokey room.

In keeping with the industrial feel, I eyed this towel rail from Anthropologie.

And while I love Anthropologie, I equally hate their nonsensical  prices.

I can’t remember exactly how much they were selling it for, but it was definitely too much and way over $100. 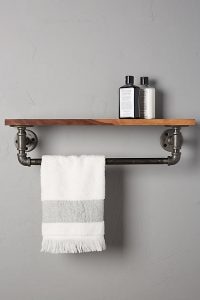 And so, I decided to make one myself.  Everything you need you can find at Lowes in the plumbing aisle.  I actually assembled the framework in the middle of the aisle. Because I don’t have time to worry about what people are saying about the crazy lady on Aisle 13 playing with  nipples and whatnot.

I don’t have to care.

I later found a scrap piece of wood, stained it and Voila!

The wall mirror I found at Salvation Army (a place I seldom go to these days).

Funny story attached to this mirror, because I almost didn’t get it.

I spotted it resting against a wall, just minding it’s own business.  And I swear, on the powers above, my eyes kinda looked like this.

The type of love that you would die for.

And so I grabbed it and   walked swiftly to the cashier.  And everything was fine, until a really big woman tapped me on the shoulder and said ‘That’s mine”.  And I looked at her, and then I looked at the mirror and she said ‘It’s mine.  I hid it, I was going to go back for it”.  And I looked at the mirror, and my heart silently broke for a moment and I just loved the mirror but I knew she could chew me up and spit me out without breaking into a sweat.  And so I kinda mumbled something to her like ‘Oh sorry, it was just resting against the wall’ and my heart was beating so fast because I thought she was seriously going to pummel me, kick me to the curb and take possession of the world’s most loveliest of mirrors.  And it would be so embarrassing. But she simply said ‘Fine’ and walked away.

And I have to tell you, ‘Fine’ never sounded so sweet.  No sirree.

I paid my $47 and walked out of the Salvation Army with one less life to live, but one new mirror.  Fair price to pay.

The idea of having stark white walls came about because of my love for this oil painting.

I can’t remember where I bought it, but I do remember that I bought it because of the vivid colors.  I was looking for a piece of artwork that I could use for staging my pieces, and this fit the bill perfectly because it would go with any color palette. My husband does not like this painting.  At all.  ‘Hate’ is not a strong enough term for him.  I know he hates it because he says things like “Listen, you don’t have to sell it.  Just give it away”.  Or ‘Do us all a favor and toss it” And he says things like that a lot.  All the time.

And so I thought long and hard about where to hang it and then I had an epiphany.

It should go above the toilet.  Now every time he goes pee-pee he has to look at it.

#poeticjustice  Don’t talk smack about my artwork. I don’t have to listen.

(Although I will admit that since I wrote this blog my heart has softened a a smidge. And I replaced the painting with my own artwork. This was my first attempt of doing ‘wall art’ and I think I did OK.

The other major piece of ‘art’ and (I use the term lightly here) is my Gym Rules sign.

It’s actually a prop used by NBC’s ‘Grimm’ series.  The series was filmed in Portland; when filming ceased the set designers had a huge warehouse sale.  This was one of the treasures I found.

It’s always good to set the ground rules: inform your guests that spitting on the floor isn’t allowed in this house.

So there you have it.  My non-conforming Powder Room/Water Closet.

It’s just a blend of everything I love: From the broken ceramics I found on Lake Como, Italy spritzed with Lavender oil.

To the English Lavender cut from my garden.

And Cupid. With Eros.

And I know, to some, it doesn’t necessarily make ‘design sense’ but that’s OK

And I don’t have to mind.

The only thing I have to do, is love it.

With apologies about the poor quality of the photos!