Where do I begin?

I bought it anyway.  It would sell quickly.  I was blindly in love with it,  and everyone knows that blind love deafens out rationale, any day of the week. It is [was] gorgeously massive.  With Barley Twist detailing.  But, if I’m being truthful, it was not without problems.

The veneer had to be removed in several places.  Some of the joints had expanded and buckled.  But did I already tell you?  It was beautiful.  And it would make a beautiful canvas for The Lady of Shallot. The Barley Twist could serve to  mimic the movement of the water.  I know, right.

And I loved it.  Except for one small detail.  A small detail that kept getting bigger and BIGGER every time I looked at it.

The placement of her face.

One of the drawbacks of doing Image Transfer, is that you’re working ‘blind’.   Meaning, because the image goes face down on the furniture, you only see the back of the paper.  I thought I’d measured and adjusted the image to miss the drawer spacers.  But, obviously, Math is not my strong point. PLUS –  another frustration with Image Transfer is that, if you mess up, you only realize it when it’s too late.

[For a small window of time, you live life in perfect harmony with your piece.  You’re the Queen of Image Transfer.  You can do no wrong.  You are ALL THAT, and some more.   Essentially, Image Transfer gives you a false sense of security; it feeds your ego only to then suck it mercilessly dry from within you – without the decency of prior warning].

This I know to be true.

But I just can’t quit it.

Regardless, the dresser sold.  Almost.  Well, technically, it did sell but my client decided to take another piece instead.  It was a difficult decision for her.  I know that she really did want both pieces, she just didn’t have space in her current home.  So – she put a spell on it.  And she’s admitted to doing it  (the relationship I have with my clients is one based on honesty and mutual respect).  So, thanks, Kathleen?  Her spell meant that it wouldn’t sell to anyone else, until she found space for it.

I hate when clients put spells on my pieces.  So annoying.  (Yeah, Kathleen I’m talking about you).

And then.  It almost sold again.  But the spell did it’s stuff, and my second buyer decided she was going in another direction with her decor.  And seriously, who wants to mess around with cursed furniture?? Not I.  So it stayed in my garage.  And every time I looked at it I thought of the curse, and the placement of the face and I knew.

Things had to change.

I did love the paint colors (Emperor Silk/Primer Red with Olive Annie Sloan Chalk paint, with General Finishes Van Dyke glaze).   So that was going to remain the same.  I just needed to strip the existing image (and hopefully the curse) and look for more inspiration.  The stripping part wasn’t easy. I can not lie.  It was actually quite emotionally painful.  This is when ‘Self-Doubt” typically creeps in.  (Only to be quickly  squashed down by a glass of cheap Chardonnay).  I’m getting old, I don’t have time for Self-Doubt.

The dresser is an antique Scottish Barley Twist dresser; and so it made sense that I should try and use a British painter; and an image that would also go with the earthy color palette.

And I found this.  John Constable’s ‘The Hay Wain”.  Constable was born in Suffolk (the area my husband was raised as a child).

And so, the stars magically aligned (finally).

And now I love it.  Lots of distressing.

Lots of hope (that it sells).

And if it doesn’t?

Well…I’ve spent so much time on this beauty that

I’m going to chop it up.  And burn it.  Because I’m too old for this kind of Shenanigans. 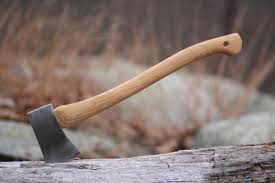