Tip of the Day:   If you want to turn a quick profit, don’t do image transfer.

Seriously.  Don’t even think about it.  For the time involved in getting a truly ‘authentic’ look (meaning to have the artwork appear to be original to the piece) you would weep a river of  tears if you did the math and found out your hourly pay.  Peanuts, my friends.  Sour, bitter tasting peanuts that almost elicit the gag reflex.  Very unpalatable.

But.  If you want to make a piece of furniture truly unique and stand out from the crowd,  do image transfer.

A good friend asked me why I still focus on this method.  She has a point;  my pieces appeal to such a small niche in the market that often it can take months and months to find a buyer.  My honest answer was ‘ It’s relaxing to me’.   I really  enjoy doing it.  I can spend hours upon hours  searching for the right image.  Magical.    And that ~ the simple JOY factor ~ is priceless.  So I spend my time doing image transfers, making very little money.  Firmly living in the belief that my life resembles a Shakespearean tragedy.

(such a melodramatic drama queen, am I).

So, what is image transfer?  Using the most simplistic example, think of it as a child’s fake tattoo. 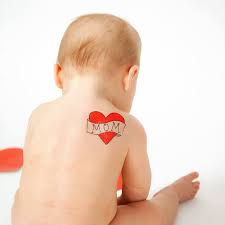 Image face down, and rub away at the paper backing.   All that’s left is the image on the surface.   Easy, right?

I’m not sure what my first image transfer was (possibly this small coffee table).  I used a vintage black and white photograph of downtown Portland.  The rust patina is achieved by using Modern Masters Reactive Iron paint and patina.   This was a small table, and therefore relatively easy to transfer.  My advice to you: Start small.   Get a feel of removing the paper before you go for a big image.  There’s nothing worse than having your confidence blown by taking on a project that’s too overwhelming.  Don’t do that to yourself.

Before I started playing with image Transfer, I dabbled with decoupage.   By ‘dabbling’ I mean  I’ve done two pieces using small sections of decoupage.  No big whoop de woo.

Decoupage is the much easier, faster version of image transfer.  With decoupage, you’re gluing an image directly to the piece of furniture.   And there are lots of adhesives to choose from.  Mod Podge is probably the most commonly used one.

With decoupage:  Apply a thin coat of adhesive on the piece of furniture, place the image face side up, smooth out any air bubbles, trim and then seal with several thin coats of adhesive.

The pros:  Easy Application. Inexpensive adhesive can be used.  Any size image can work (eg.  Posters).  Excellent chance that full image will be transferred to the piece.

The Cons:  While it’s a simple process to do, the biggest downfall is that you have to deal with the thickness of the image.  You can’t ‘remove’ the backing, and so the image can appear ‘bulky’.  You also have to deal with trying to blend in the edges of the paper to the rest of the surface.  It might not seem to be a big con, but if you’re tactile (like me) it bugged the heebeegeebees out of me.  I wouldn’t feel comfortable doing this on a big piece of furniture.

I quickly realized that I  disliked decoupage.

I did try to adapt the decoupage process, by using an engineering print.   Same concept, except with engineering prints you can get your image copied to ANY size – like HUGE – for pennies.  The cons to this method are that the image is grainy (which I actually like), but the paper is very thin and applying a big image to a piece of furniture without going crazy is  impossible.  It really is a two person job, and because the paper is so fine there’s no wiggle room to readjust the image.  If instant commitment isn’t your thing, you’d be wise to skip this method.

You have no idea how crazed I was after doing this engineering print  (It actually lives in Salem, Oregon now).  Good riddance to it, I say.

So, I quickly moved on to image transfer.  And that’s when I feel in love.  I’m not a natural painter.  I can’t freehand paint.  I leave that to the real artists.  I glue stuff on pieces.

But, I like to think I’m very good at it.  And still learning, thankfully.

The Pros: Because you remove the backing pulp, you don’t have to contend with the ‘edge’ problem.  You can retouch the image with paints to add depth, interest to the piece.  The only material that is being transferred is the image itself, so it leans itself to a more organic end product.

The Cons:  The image has to be reprinted with a laser printer, otherwise you lose some of the clarity of the image.  Laser printers are limited in size. The biggest print you can get is 11″x 17″.   Therefore, if you’re working on a big image, you have to piece the small tiles/blocks together.You have to work with the image ‘facedown’, so placement is paramount.  The last thing you want  (after spending hours removing the pulp) is to discover that the subjects face lies midway between two drawers.  It’s incredibly time-consuming and messy.  You usually end up losing some degree of the printed image (regardless of how careful you are), which will require you to handpaint over those areas (another part that I especially love).

The Bath of Psyche (1890) was one of my first transfers using Mod Podge.  It’s ‘Cheap as Chips’ and readily available at most craft stores.  With Mod Podge you don’t need to have the image laser printed.  But it shows.   It worked, but it just wasn’t a clean and crisp transfer.   I love the image itself, but I hated the execution of it.  (I ended up painting over this).  Way to go, Diane (you tragic figure, you).

With  The Crystal Ball (1902) I experimented with Annie Sloan Decoupage glue.  I did go the extra step and  laser printed the image.  Much crisper, but I did lose some of the image that needed to be filled in later (this I believe is just the nature of the beast).  ASCP decoupage glue worked, but it’s expensive  and I wasn’t in love with the texture of the glue (every time I looked at the glue I was cruelly reminded of my cellulose stricken thighs. No one wants that vision while working). The Highboy took an entire jar of ASCP decoupage glue ($22.5o for a 125ml jar).  Golly Jeepers!

What I use all the time (what I’m comfortable using) is Artisan Enhancements Transfer Gel.  I’ve been using it for almost three years now.    It’s usually around the $32 mark for a quart size can.  And it lasts a long time! It can also be used as a decoupage medium.

I strongly encourage you to try out different products.   One shoe doesn’t necessarily fit all.  Don’t follow the hype, try stuff yourself.  Get a feel for what feels right for you.  This product is what I choose to use.

Here are a few examples of my pieces using Artisan Enhancements.

I mentioned to  Artisan Enhancements that I was writing a post on decoupage/image transfer and they very nicely offered to send a one quart can of Transfer Gel to someone from my Facebook page!  Yeah!

So hop over to my page, Like it, and leave a comment.  I’ll pick a name from a hat in the New Year and you can try it out!!

And with that, I’ll say Happy New Year lovely people!  Looking forward to enjoying a colorful 2016 with you!